After finishing a workshop with Box Cars and One Eyed Jacks for my day school (grade K-5) I was pumped to put the games into action. I was heading to night school to teach Grade 11’s and thought the activity could be transferred but didn’t know how the 11’s would take to it. The last group activity did not go as planned in my mind and they much preferred working alone. But, as teachers you know that excitement we have with our own plans when we have that “amazing lesson” so I was going with it. 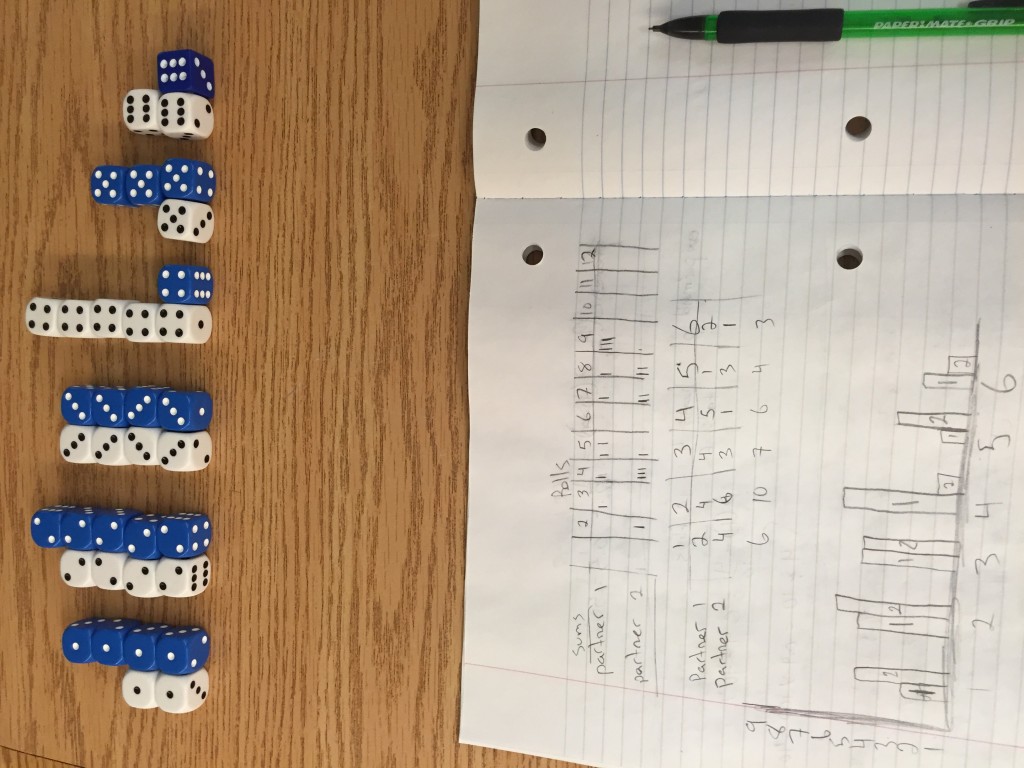 It was met with reservation, when I told them “we were going to be in partners, I had dice and we would be playing games,” but they humoured me and did all the tasks for the full 3 hours.

Intermittent with mini lessons and than activities we covered 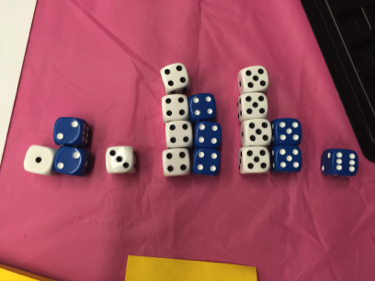 This was the first class for Statistics and Probability unit (MBF 3C0) and here is an overview of the successes. It can be adapted for any grade

We started with boring definitions of types of data, reviewing the types of graphs to use. Then in partners I had them play “A Sum Game” (It is called “Racetrack” in Box Car resources, but I was worried putting a title to it they wouldn’t want to play the ‘silly’ game). After explaining the rules, and a few pairs having to play a few times to follow the instructions properly, they packed their dice back up. 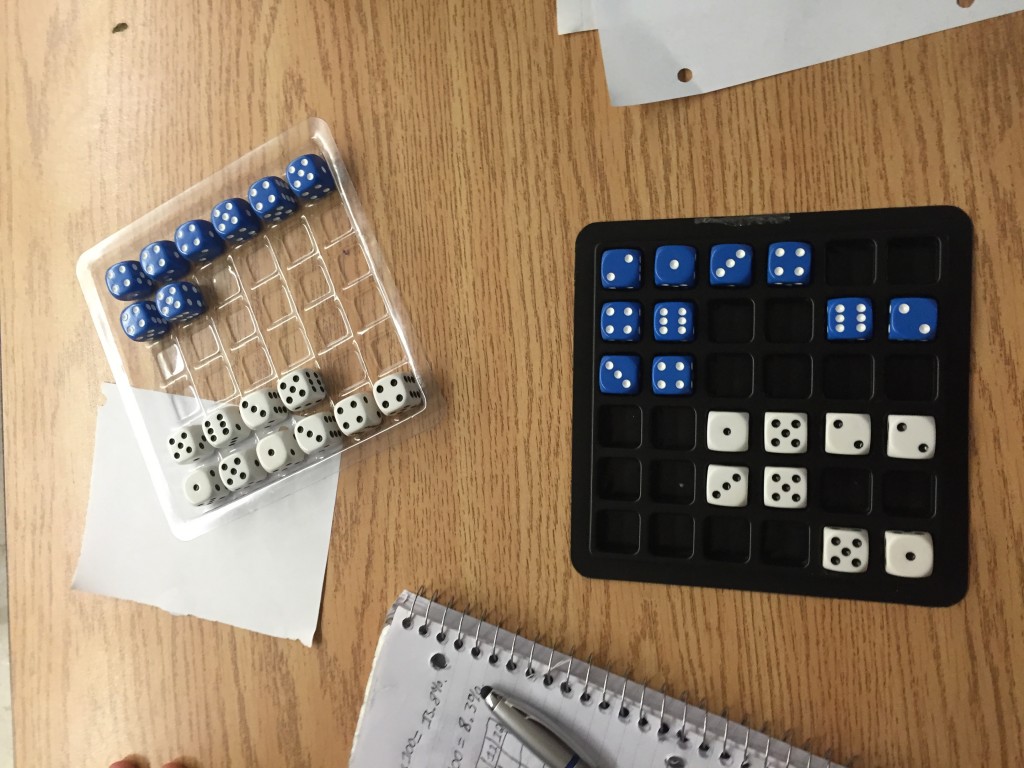 Next, they were to play the Sum game again. Ensuring they kept their dice accurately (no tossing the losing dice aside).

I had them write on a slip of paper who won (blue/white) and was it a blow out or close game – then turn that paper over. (Don’t clean up the dice yet!) 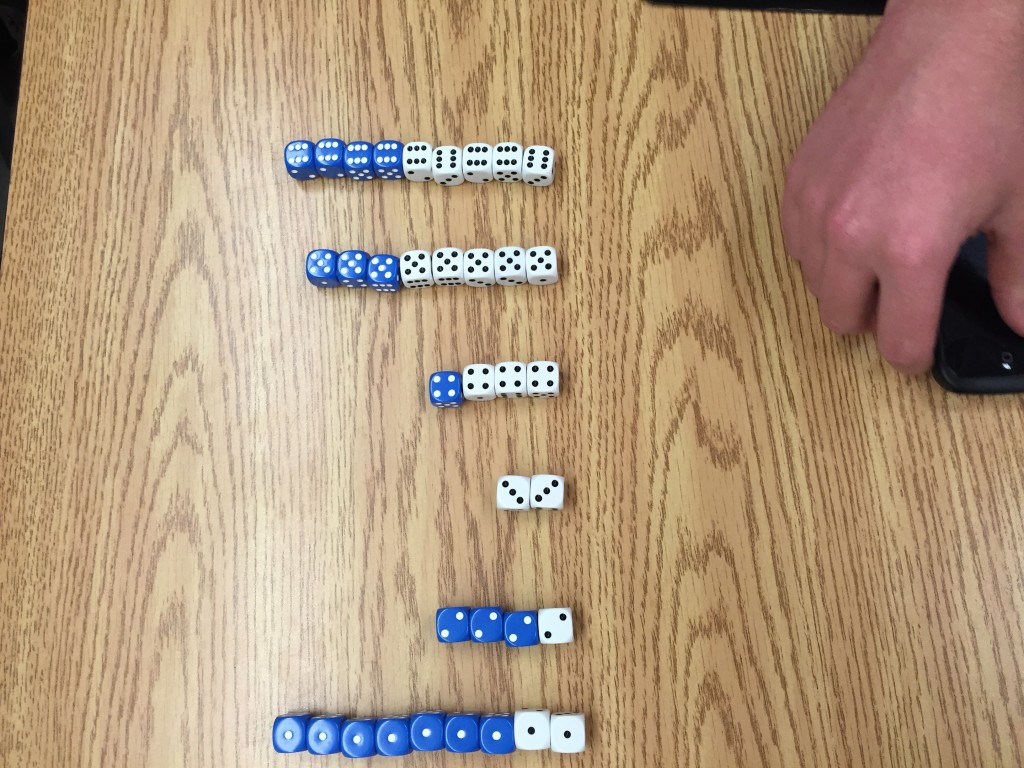 I asked them by looking at your dice how could you easily tell what number was rolled the most (ignoring sums). A Bar graph, so we rearranged the dice into bar graphs.

From there we realized a double bar graphs help us see the amount of blue/white rolls. Don’t clean up yet!

To increase our thinking power we were to go around to different tables graphs and predict from the double bar graph who won (blue/white) and if it was a close game or not. I did not spend a lot of time on this, but it was a lot of fun at the workshop trying to find out the pattern to predict who won. 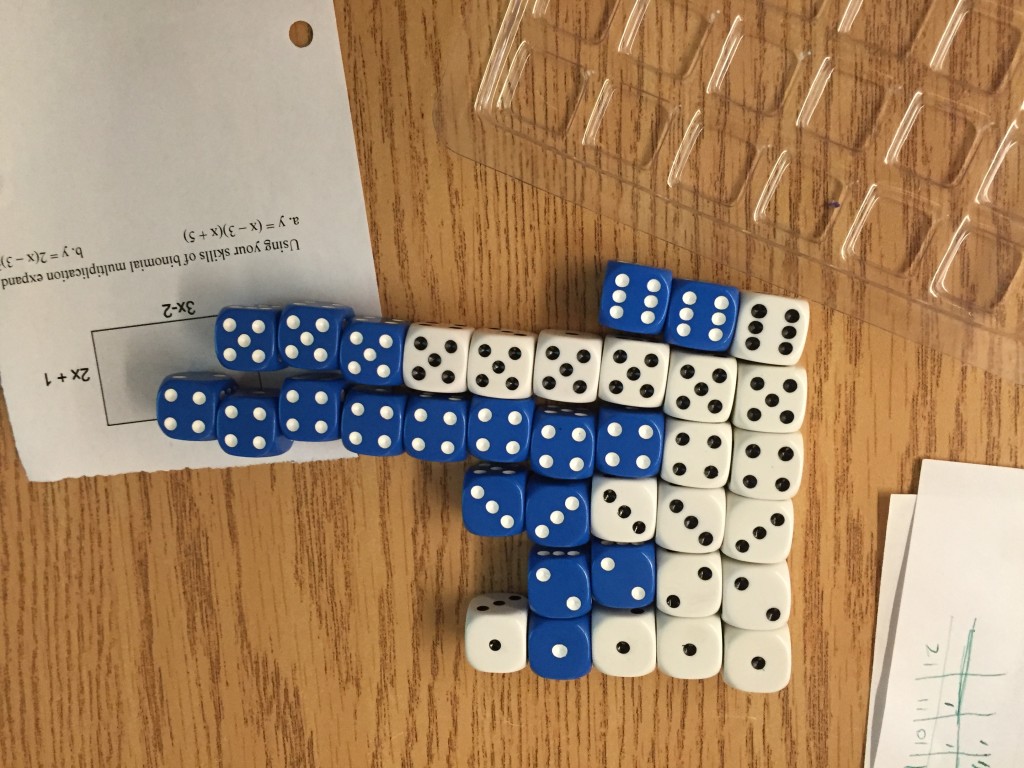 I had them sketch their graphs into their notes and calculate their team probabilities of rolling each number. We compared them to the theoretical probability and discussed why they were different and what do we think would happen if we added all our data together. Which we did and of course the experimental probability matched our theoretical. Still, don’t pack up (lots of laughter when some groups had to replay – a few times- as they kept packing up)

Then we did a mini lesson on types of distribution, by this point I had all the groups graphs on the iPad (pictures got deleted so not in file) and could show them on the screen and we classified each pairs graph as bimodal, normal, or skewed.

Predict what would the graph look like if we combined all our 216 dice? How can you justify it? And the look was a resounding “really miss?” Yup! Bring your dice up for a large class graph 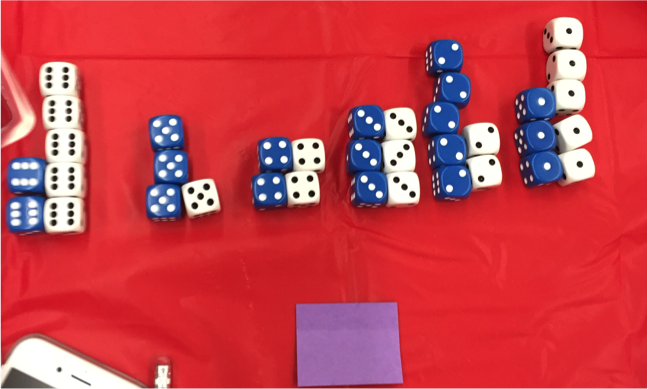 Now we ran out of time, but I would have also had them predict (and make) the distribution of the sums. So I had my grade 5’s play Sums and graph them for me.

Needless to say we covered a lot of material, they had a lot of fun (whether they admit it or not) and they were all engaged! Thanks @BoxCarsEduc for yet another inspiring workshop.

I would love to know how you adapt it for your class. Any questions about the games contact me on twitter @EvershedK