Top Tips on using a visualiser in the classroom! >> Great advice!

Top Tips on using a visualiser in the classroom

We had visualisers installed in every classroom in our school about 2 years ago. We use Promethean interactive white boards (IWB) with Active Inspire software (‘flipcharts’) and the visualisers we have are called Active View.

Often compared to over-head projectors, visualisers are able to show on the IBW resources that you have to hand. They are far more versatile than the old OHPs as it basically consists of a web-cam so you can easily show any document or resource very quickly and clearly on the board without having to prepare acetates. One can also zoom in and take photos with the visualiser which are handy functions.

At first I did not know what to do with my visualiser and I was reasonably addicted to creating lessons based on ‘flipcharts’ so for some time my visualiser went un-used.

It wasn’t until, through the Pixl organisation, I came across the idea of the “walking talking mock” (WTM) that I found my first use of the visualiser. The WTM is a powerful tool for exam preparation. Normally it involves taking a brief look at a question, or number of questions from a past paper, maybe highlighting with the class some of the concepts involved before giving the students the allotted time to attempt the questions. The visualiser comes in after this as the teacher then models the answer on the exam paper using the visualiser. I normally have the pupils amend or annotate their answers using green pen as I model the answer on the board. The WTM is so powerful that we consistently use this as an exam preparation tool with all years throughout the school year.

I used to spend hours using a snip tool to cut and paste parts of documents and worksheets and embedding these into my ‘flipcharts’ for use on the IWB. Now with the visualiser, I just need to make a couple of extra worksheets for me. On one spare w/sheet I will fill all the answers in before-hand so I can quickly reveal the answer to any question or group of questions. The other worksheet I will leave blank so I can model the answer to any question live in-front of my students.

The visualiser makes the modelling of answers so much more powerful then when done using an IWB or traditional white/black board. One can never quite replicate exactly what the students see or need to do when writing at a board but with the visualiser you are showing the pupils what they need to do with the same tools they are using. This is especially true in maths when demonstrating protractor and compass use or other tools.

The visualiser also helps with at least two techniques found in Doug Lemov’s Teach Like a Champion (TLAC). Technique 14 “Board = Paper” is so much easier with the visualiser as the board does actually equal the paper. One is not attempting to replicate the paper as much as one can on a white/black board or IWB software package but the board has literally become the paper as you have the exact same sheet up there that the pupils have in front of them. As Lemov says: “Students often have to learn how to be students as much as they need to learn content and skills, and the processes and practices of being a student also must be assimilated by modelling”. The visualiser is the perfect tool for this job.

The other TLAC technique for which I use the visualiser is the “Show Call” where, having circulated the room during an activity, I have identified one or two pieces of work which I bring to the front and place under the visualiser. This allows us to talk as a class about the good points of a student’s work and where it might be improved. The immediacy of it is fantastic! Pupils love seeing their work on the board and if you have the classroom climate right they enjoy hearing the feedback from their peers and are keen to act on it once they get their work back. I told my yr 11s I was writing a blog on our use of the visualiser and this came back as their favourite use of it, sharing each other’s’ work on the board.

How teachers use visualisers in their classroom

I also asked my colleagues to share their experiences and favourite uses of the visualiser and this is what came back: 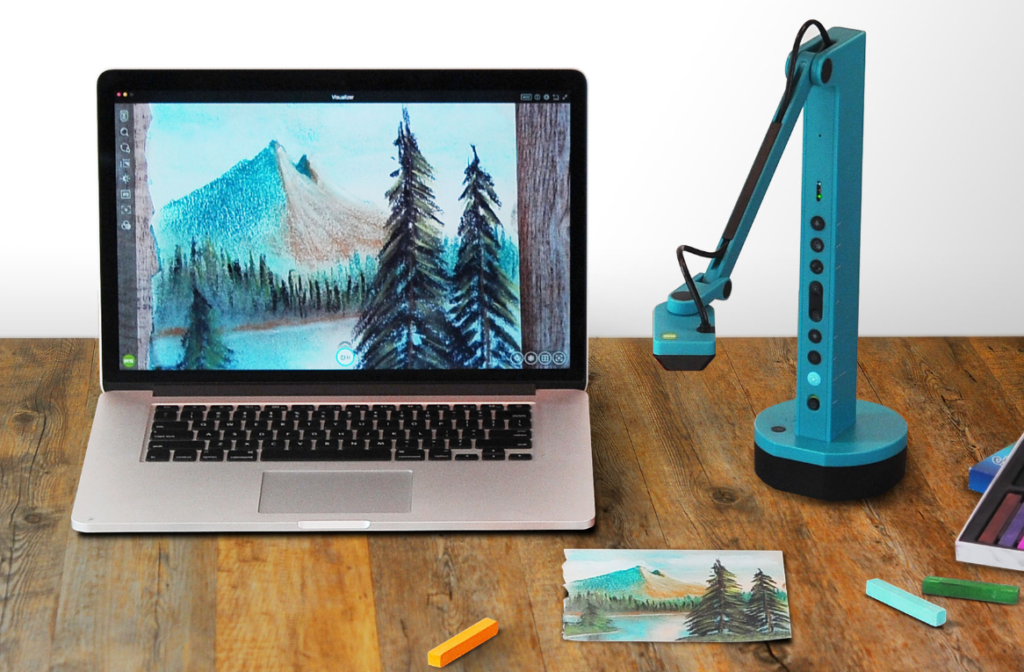 In addition to traditional classrooms, visualisers also help online teaching. With a laptop, earphones, and Internet, you may teach in any corner on the earth. Take IPEVO VZ-X visualiser as an example, it can be used like a web camera for distance learning, tutoring, cross-cultural exchanges, and e-learning videos. VZ-X can not only connect via USB and HDMI but also connects via WIFI. It can wirelessly connect to your computer, iOS/Android devices and Apple TV through Wi-Fi mode. Most importantly, it can be used together with video conferencing software such as GoToMeeting, Skype or Google Hangouts. All a teacher has to do is to pick up a pen and paper on the table and aim the visualiser downward so that students may view what you are writing down clearly from a distance. Isn’t everything simpler and more efficient?

Tagged with: active, board, Exam, flipcharts, How teachers use visualisers in their classroom, inspire, interactive, modelling, Pixl, preparation, Top Tips on using a visualiser in the classroom, visualiser, white