How to store, transport and charge multiple ipads in the classroom? 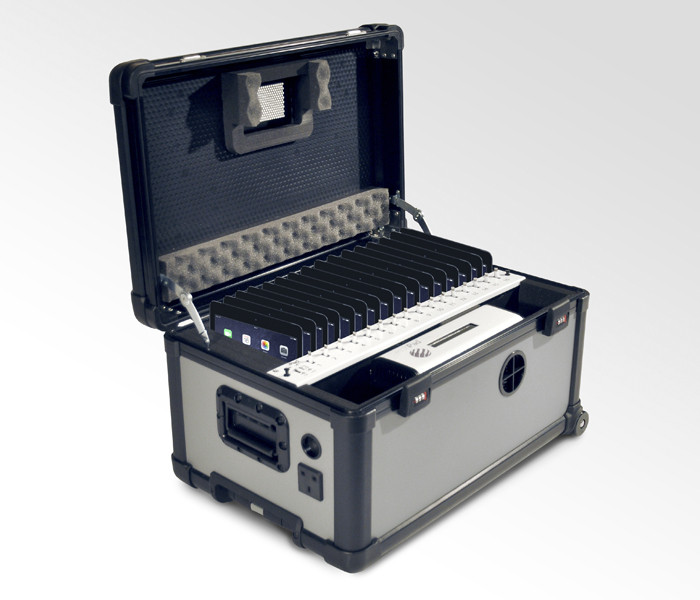 How to store, transport and charge multiple ipads in the classroom?

Do you have more iPads than places to either safely store or charge them? MultiPad may have the answer…

iPads have grown in number in classrooms everywhere faster than places where they can be safely stored, or charged. Moving them around has proved problematic too. They’re robust, but only up to a point, very desirable things to be sure, and they’re needed in locations often a long way removed from where they are stored or charged.

Where there’s a need, invention finds a way so it wasn’t long before solutions to the growing problem began to appear. Where a population of iPads could be tied to a single location, lockers, usually wall-mounted were installed. Each locker location provided a secure home for an iPad, kept it safe and in a good state of charge. The more advanced solutions also helped keep content synchronised. At a price.

Portability is one of the iPad’s more valued features and so solutions that helped manage iPad populations but gave them a degree of freedom to move from place to place were introduced. Such solutions typically comprised a trolly, often compared to the sort of thing seen wheeled along the aisle in aircraft, with locations for around thirty iPads. The units are secure, keep the iPads in good health, but, as many adopters have discovered, are in fact, far from portable with even a single step presenting an Everest to negotiate. They’re heavy too. Some are known that tip the scales at over a hundred kilos.

Nailsea based Protechnic took a long look at what was available and determined that, locked up in the DNA of its UK designed and manufactured products, was a potential answer to the needs of people who have to work with multiple iPads.

Protechnic is no stranger to protecting valuable assets. The company designs and manufactures in the UK a patented range of transit cases which keep customers in the world’s military, industry and government establishments coming back for more. The cases offer an incredible level of protection and yet manage to cast themselves in the lightweight sector.

Protechnic has turned the art of protection into a science and built on those foundations superior potability. A Protechnic case is in its element when its being bumped up and down stairs, wheeled over rough ground or rattled around in the hold of a coach or boot of a car. The cases’ contents are happy with the ride too.

How does this apply when iPads are the subjects needing protection? Military grade protection comes at a price after all. It does. But thanks to Protechnic, it’s a price that practically anyone can afford.

The company’s new Juiceit 10 and its bigger brother the Juiceit 20 offer secure, highly portable protection and storage for ten and twenty iPads respectively and define a new class of product in the market for secure iPad transit and storage. The Juiceit keeps its valuable loads charged as well. By using the charging hardware supplied with the iPad and cleverly integrating it in the Juiceit case, the price is kept very low without compromising either security or portability.

Protechnic supplies the Juiceit case direct and through selected distribution partners and backs the product up with a solid warranty and technical support if needed.

Tagged with: How to store, transport and charge multiple ipads in the classroom?