Finally, an explanation to that 2 different Casio calculator answer debate! When 1=9! 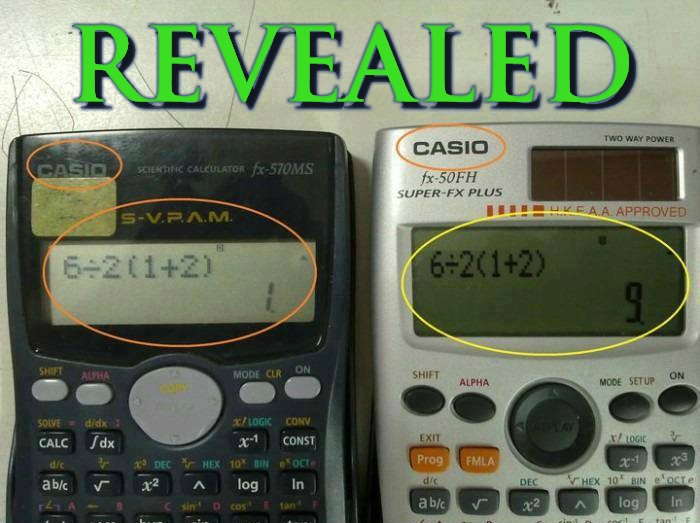 It’s Saturday. I’m out with Garstang Cycling Club, enjoying the lumpy roads that traverse the Forest of Bowland and waiting for the promised torrential rain which is supposed to stop us overheating on this cool March morning. We stop for a coffee at a fine Waddington café and I see this on Facebook from my friend Karen as I tuck into my bacon and Stilton panini:

Well, this is easy. The one on the left is obviously right and the one on the right is obviously not right. I give it almost exactly no more thought and continue the bike ride up towards Pendle Hill, beginning to worry that we might be about to go all the way to the summit, then across the Ribble and past Stonyhurst College. Then my left crank falls off and I cycle four miles with just one pedal. You should try it. Mostly for the pleasure that arrives when you stop doing it. I call my wife to ask for a lift home and notice she’s come to the same conclusion about the two calculators as I. She’s also a maths teacher. She even has a degree in the subject and everything.

Someone else, another teacher, then disagrees. We dismiss her as obviously wrong but there’s something thoroughly logical about her explanation. It just doesn’t sit right with me however. I wonder, where is BODMAS/BIDMAS/PEDMAS/PIDMAS actually defined? It certainly wasn’t Euclid’s doing.

A video is posted. The apparently knowledgeable chap in the video (and I’ve not listened to it all the way through, I was busy watching the Tour of Catalonia on the tellybox) disagrees with my thinking. Further research brings up another video in which Professor Stein joins the 1 camp but then, two weeks later, changes his mind.

6÷2(1+2) requires us first to work out 2 times (1+2). Why? Aren’t division and multiplication equal in precedence? Certainly. But 2 is fixed to (1+2) due to the absence of any multiplication sign. In the same way, 4n÷2n is 2. Rejecting that thought would lead to 4n÷2n being 2n². Another way of viewing this: we are commanded by BODMAS to dispose of the brackets first. If I have 6÷2(3) then the brackets are still there. I cannot yet divide 6 by 2. I can only rid myself of the brackets by multiplying 2 by 3. 6÷6=1.

However, I can find no evidence anywhere to suggest that this implicit multiplication should be dealt with differently from explicit multiplication. This page at StackExchange gave me some food for thought, in particular Greg Martin’s comment about spacing and scope, still however I saw nothing definite.

Then, while trying to answer my question about implicit multiplication and BODMAS, I found the now retired maths professor George Bergman of the University of California, Berkeley discussing the order of arithmetic operations. Revelatory to me was the following (my emphasis):

From correspondence with people on the the  48/2(9+3)  problem, I have learned that in many schools today, students are taught a mnemonic “PEMDAS” for order of operations:  Parentheses, Exponents, Multiplication, Division, Addition, Subtraction.  If this is taken to mean, say, that addition should be done before subtraction, it will lead to the wrong answer for  a−b+c.  Presumably, teachers explain that it means “Parentheses — then Exponents — then Multiplication and Division — then Addition and Subtraction”, with the proviso that in the “Addition and Subtraction” step, and likewise in the “Multiplication and Division” step, one calculates from left to right.  This fits the standard convention for addition and subtraction, and would provide an unambiguous interpretation for  a/bc,  namely,  (a/b)c.  But so far as I know, it is a creation of some educator, who has taken conventions in real use, and extended them to cover cases where there is no accepted convention.  So it misleads students; and moreover, if students are taught PEMDAS by rote without the proviso mentioned above, they will not even get the standard interpretation of  a−b+c.

Also, from PurpleMath.com (a website written by Elizabeth Stapel, formerly of Western International University, Phoenix, Arizona) ’The general consensus among math people is that “multiplication by juxtaposition” (that is, multiplying by just putting things next to each other, rather than using the “×” sign) indicates that the juxtaposed values must be multiplied together before processing other operations.’

So, what have I learnt today?

Firstly, this problem almost certainly only exists because someone wrote it to create discussion.

Secondly, nobody seems to know where BODMAS (or whatever you choose to call it) came from. In all honesty, this is key to the debate!

Thirdly, this means whatever the author wishes it to mean and, frankly, without knowing exactly what problem the author was trying to solve, we cannot know a firm answer.

One comment on “Finally, an explanation to that 2 different Casio calculator answer debate! When 1=9!”